Gaplek meal finds some application in those starch-using industries where the high content of moulds, fibre, and other constituents of the whole root can raise no serious objection, as in textile finishing and the manufacture of alcohol. As it is easy to maintain a large stock of gaplek, there would therefore be obvious advantages in using it as a basic material for the production of pure cassava starch.

A somewhat more elaborate treatment of the root than is needed for the production of gaplek leads to conservable food products which seem to be known only in Latin America and play an important role in nutrition there. It is interesting that this mode of preparation is usually combined with the traditional manufacture of crude cassava flour at the domestic level.

It is heated, in the open air, in a pan on a flat oven with a top consisting of granite slabs which guarantee even heat without burning. The pulp is turned continuously with a wooden rake during 3 to 4 hours of baking, which produces a granular, only slightly roasted product. If dry, farinha will keep indefinitely. It is an excellent cereal, usually eaten like rice in combination with other foods, especially meat and gravy, but it is also very useful as an emergency ration for travellers. It is known as farinha de mandioca or farinha de mesa. By heating the pulp more intensively, without stirring, until the mass is slightly brown on one side, it sets into a solid slab. After baking on both sides, the cakes are further dried in the sun, and in this state will keep indefinitely. This cassava bread, or couac, is very hard, but it has an excellent flavour: it is usually eaten after being dipped in gravy.

A popular food among the low-income groups in West Africa and Nigeria, it is made by fermenting grated cassava tubers, semidextrinizing the mash by heat and finally drying the product to a type of meal. In rural areas, the roots are peeled and grated, and the pulp is put into a large cloth bag and set in the sun to drain and to ferment. When the pulp is sufficiently dry, it is removed from the sack for final drying on a low fire. Fermentation liberates the hydrocyanic acid at low pH and develops the characteristic flavour of gari. It is carried out first by cassava bacteria (Corynebacreriummanihot) that attack the starch with the production of lactic and formic acids, and then by a fungus (Geotricium candida) that acts when the pH has fallen to about 4.2, increasing the acidification and producing the characteristic aroma. Hydrogen cyanide is liberated during fermentation through the spontaneous hydrolysis of the cyanogenicglucoside of cassava at a low pH value. Many attempts are being made in Nigeria to mechanize gari production under hygienic conditions as well as to fortify this low-nutrition food with a protein additive.

This product is prepared by shredding the tubers and pressing the grated mass in a cloth until most of the juice is squeezed out. By whirling the mass in a winnowing basket, pellets are formed, their size determined by the speed of the motion and the moisture content. Pellets of more or less uniform size are isolated by sifting, steamed and then dried in the sun for some days. Alternatively, the tubers are soaked in water in earthenware jars (contact with metal should be avoided) until after five to seven days they begin to soften. Then they are macerated, the fibre is removed by hand and the mass is air dried before being made into pellets in the way just mentioned.

High quality cassava flour is simple unfermented cassava flour. The IITA production process minimizes the capital investment requirements for flour production by making use of simple equipment already used for gari processing. The technique is suitable for preparing cassava flour from both sweet and bitter varieties.Mini-chippers were also tried in place of the mechanical grater but were found to be unsuitable for bitter varieties because the concentration of cyanogenicglucosides was not reduced sufficiently during processing. 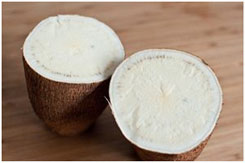 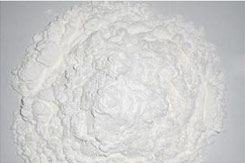 Ethanol is generally produced by the fermentation of sugar, cellulose, or converted starch and has a long history. In Nigeria, local production of ethanol from maize, guinea corn, millet, other starchy substrates, and cellulose is as old as the country itself. Apart from food and pharmaceutical uses, ethanol is finding itself alternative usse for biofuel in most of the developed world.