Cassava is extensively cultivated as an annual crop in tropical and subtropical regions for its edible starchy tuberous root, a major source of carbohydrates. The flour made of the roots is called farinha de mandioca, biju and tapioca.


Cassava is the West Indian name; manioc, or mandioc, is the Brazilian name; and juca, or yucca, is used in other parts of South America. The plan grows in a bushy form, up to 2.4 m (8 ft) tall, with greenish-yellow flowers. The roots are up to 8 cm (3 in) thick and 91 cm (36 in) long. The roots contain from 20 to 32% of starch at maturity. Early maturing cultivars are ready for harvest after 8-12 month.


Two varieties of the cassava are of economic value: the bitter, or poisonous; and the sweet, or non-poisonous. Because the volatile poison can be destroyed by heat in the process of preparation, both varieties yield a wholesome food. Cassava is the chief source of tapioca, and in some parts of Africa and South America a sauce and an intoxicating beverage are prepared from the juice. 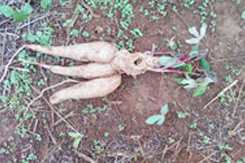 The cassava root is long and tapered, with a firm homogeneous flesh encased in a detachable rind, about 1 mm thick, rough and brown on the outside. Commercial varieties can be 5 to 10 cm in diameter at the top, and 50 to 80 cm long. A woody cordon runs along the root's axis. The flesh can be chalk-white or yellowish. Cassava roots are very rich in starch, and contain significant amounts of calcium (50 mg/100g), phosphorus (40 mg/100g) and vitamin C (25 mg/100g). However, they are poor in protein and other nutrients. In contrast, cassava leaves are a good source of protein if supplemented with the amino acid methionine despite containing cyanide.


The root in powder form is used to prepare farinha, a meal used to make thin cakes sometimes called cassava bread. The starch of cassava yields a product called Brazilian arrowroot. In some parts of Africa, where sweet cassava is grown, the roots are eaten as food, fed to stock, or used in the manufacture of starch and glucose. In Africa Gari is a popular food preparation. Tapioca, which is easily, digested starchy foodstuff extracted from the root of the cassava plant. Tapioca is often used in pudding. The term "tapioca" is used to designate products made from cassava like starch, dried chips etc. Tapioca is also replacing mung bean starch - the prime material for making clear starch noodles, however, tapioca starch need modification to produce a gel with the same strength as mung bean starch, which is very high in amylose.

No continent depends as much on root and tuber crops in feeding its population, as does Africa. In the humid and sub-humid areas of tropical Africa, cassava is either a primary staple food or a secondary co-staple. In Ghana, for example, Cassava and yams occupy an important position the agricultural economy and contribute about 46% of the agricultural Gross Domestic Product (GDP). Cassava accounts for a daily calorie intake of 30% in Ghana and is grown by nearly every farming family. The importance of cassava to many Africans is epitomized in the Ewe (a language spoken in Ghana, Togo and Benin) name for the plant, agble, and meaning "there is life." However, the price of cassava has risen significantly in the last half decade and lower-income people have turned to other carbohydrate-rich foods such as rice and spaghetti.


The processes involved in processing of cassava starch are :–


Fresh tubers are processed during season and dry chips during the off-season. 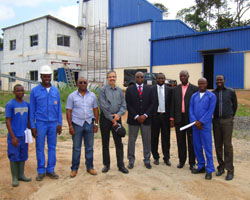 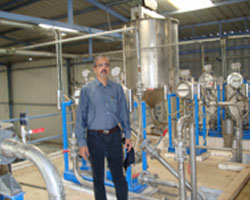 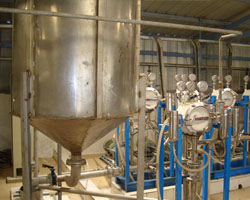